Carpe Diem
Product search
Promotional items
Do you have any questions?
Call our number at +49 [0] 9341 / 8472 0.
We are happy to advise you.
Basket
Your basket is empty.
Order form
Sign in
Forgot your password?
Register
Newsletters 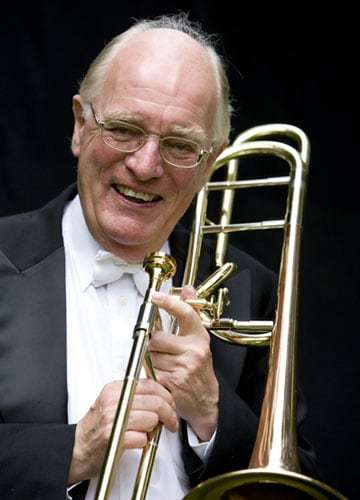 Sir Denis Wick has had for many years an international reputation as trombonist, brass teacher and conductor. Having studied in London at the Royal Academy of Music, his first professional appointment was in the Bournemouth Symphony Orchestra as the second trombonist. He became principal trombonist of the City of Birmingham Symphony Orchestra

Despite the demanding schedule of the LSO, Denis has also been a member of the London Sinfonietta and, for a short period, the Philip Jones Brass Ensemble. In addition, he has made many appearances as a soloist. He has had concertos written for him by several British composers; among them, Gordon Jacob, Buxton Orr and Alun Hoddinott.

His conducting work began at the Guildhall School in the 1960s and has been centred on brass and wind ensembles. It also included for many years an excellent youth symphony orchestra which has bred generations of professional players. His own London Wind Orchestra made prize-winning recordings in the 1970s, which have set new standards of excellence for this kind of ensemble.

Denis has been involved in music education for many years; having been appointed professor of trombone at the Guildhall School of Music and Drama in 1967, he taught there regularly until 1976, continuing to work as a consultant professor and conductor since that time. Many of today's finest professionals studied with him; his intensely musical yet very practical approach to teaching is widely respected.

His textbook, Trombone Technique is used worldwide as the most important publication of its kind, with translations available in Japanese, German, Swedish and Italian. Denis Wick is perhaps best known for his line of brass instrument mouthpieces and mutes. In 1989, he received the ITA Award and in 1990 was elected Second Vice President in charge of international affairs. From 1992 - 1995 he served as president of the British Trombone Society.

Although now retired from professional trombone playing, Denis Wick continues to be in demand as a conductor and for masterclasses worldwide. He was appointed professor of trombone at the Royal Academy of Music in 2000 and awarded a fellowship in 2002. His publishing company, Denis Wick Publishing, specialises in wind band and brass ensemble repertoire. He is a past President of the International Trombone Association.

Denis Wick is also famous for his mouthpieces and mutes. Please visit the Website of Denis Wick Ltd.