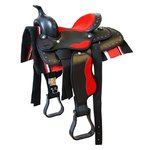 Garnet, or the group of garnets, are rock-forming minerals that occur in many varieties. The name garnet comes from the Latin word "graunum" and means "grain", which is probably due to its external appearance. Garnets have been in great demand as gemstones since ancient times and, according to an ancient myth, the sacred garnets should be able to glow from within themselves. Therefore, they were also called carbuncles in the Middle Ages. In ancient India, garnet is considered a fire of eternal transformation and, as in Buddhism, a sacred stone. Already Hildegard von Bingen used garnets to strengthen the heart because of their ascribed healing effect.

Effect: The garnet is the stone of age and aging. It gives maturity, serenity, serenity and peace. The different colours of the garnet stand for different aspects of age. The colour of the brown-orange Hessonite is reminiscent of antique furniture or old cognac. The Hessonite stands for wealth of traditions, influence and material goods, but also for the physical decay of old age. It helps to understand the intricate paths of fate and to come to terms with them.

Hessonite has an enlightening effect on the soul, gives hope and courage, increases self-confidence and gives more resistance. In this way he helps to overcome even difficult situations or depressions with the necessary patience. This healing stone changes one's attitude towards life, opens one's eyes to new perspectives through insight and thus gives the chance for self-realization, which also allows outdated views and patterns of behaviour to be discarded. In addition, it has a calming effect on the mind and feelings, brings spiritual growth and thus provides for more self-respect. The Hessonite can also help to overcome stress, anxiety, especially exam anxiety, and to alleviate schizophrenia or psychosomatic diseases.

Through meditation he can inspire sex life and have a positive effect on bones and organs. It also strengthens the will to free oneself from addictions or psychoses.