Master of the Art of Levitation 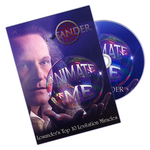 * Prices without VAT or delivery

In the world of magic there is only one name that is synonymous with the art of leviation - Losander. World renowned across five continents, Losander has performed his magic in exclusive venues from Europe to Japan to Australia. In 2006, Losander received the Milbourne Christopher Award for illusionist of the year and notable contribution to the art of magic. In 2010 he received the world famous Merlin Award for best classic Magician of the year. On this DVD Losander will teach you the essence of his work over the last 30 years. He will teach you never revealed secrets in the Art of Leviation and especially all of his highlights in close up, parlor and stage magic. If you already bought the Art of Leviation DVD, you will recognize some of the effects but you will still learn new effects and new methods to accomplish these magical miracles. A must have for everybody who wants to bring his magic to the next level. After you learn these effects, you will know all the hidden in's and out's of what makes Losander's magic so unique and magical. Some of the teachings include: Bubble Miracles How to animate objects in the most magical way What you have to project in order to make leviation real Impromptu levitation effects, so you can show real magic in daily life Bring you magic to the next level and entertain your audience with real levitation miracles. Running Time Approximately: 1hr 25min