Product search
Basket
Your basket is empty.
Order without
Registration✓
1% discount at Payment
by bank transfer✓
Free shipping within Europe
from 250€ order value✓ 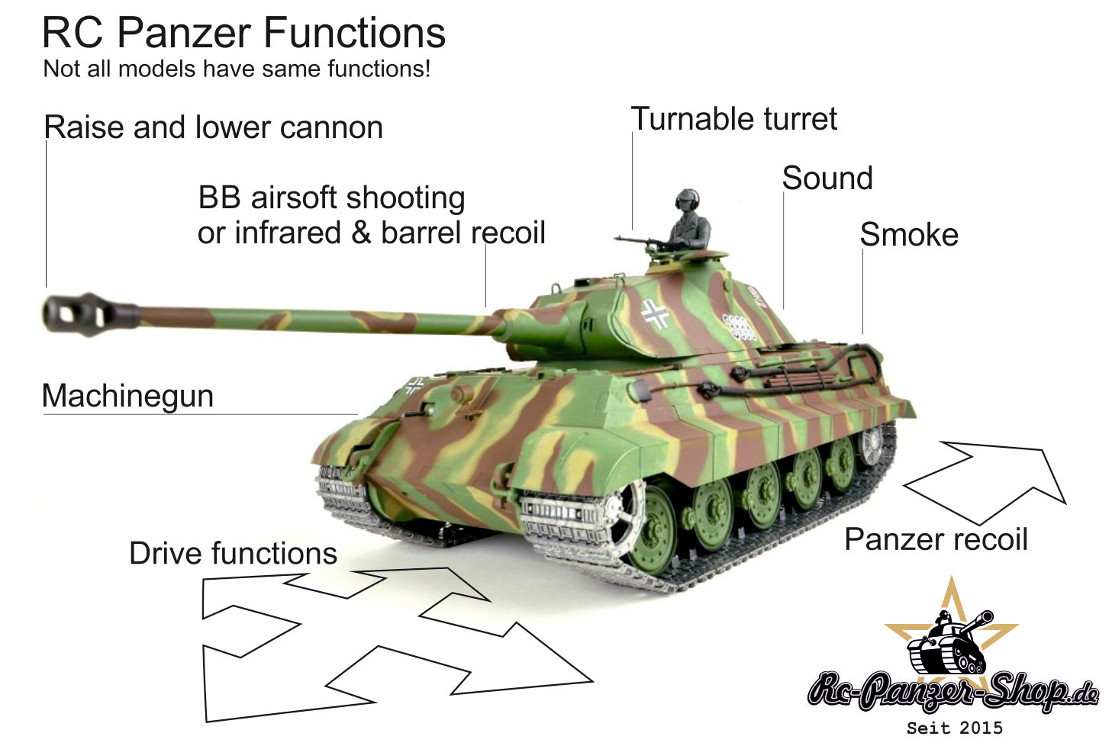 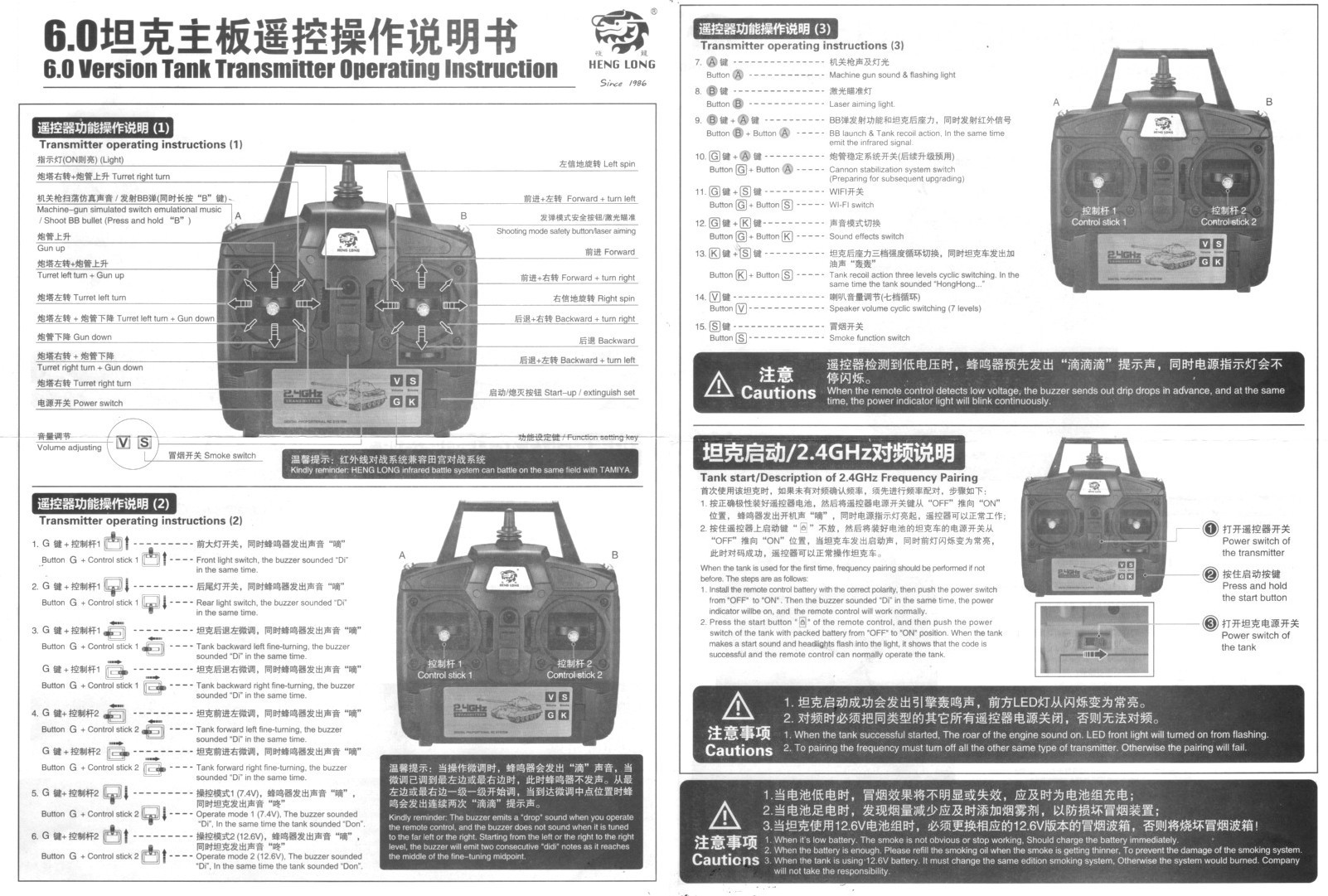 Heng Long RC Tank Model-Designations:
No. 3818-1: Tiger I German Tiger
No. 3819-1: German Panther
No. 3838-1: M26 Pershing Snow Leopard
No. 3839-1: M41 A3 Walker Bulldog Light Tank
No. 3848-1: Kampfwagen III
No. 3849-1: Tauchpanzer III
No. 3858-1: Panzerkampfwagen IV [F1]
No. 3859-1: Panzerkampfwagen IV [F2]
No. 3868-1: Sturmgeschütz III [StuG 3]
No. 3869-1: Jagdpanther
No. 3878-1: KV-1 Ehkranami
No. 3879-1: Panther Ausführung G
No. 3888-1: Königstiger / King Tiger
No. 3888A-1: Königstiger Henschelturm
No. 3889-1: Leopard 2 A6
No, 3898-1: M4A3 Sherman
No. 3899-1: ZTZ-99 MBT
No. 3908-1: British Challenger 2
No. 3909-1: T-34/85
No. 3918-1: M1A2 Abrams
No. 3938-1: Russian T-90
No. 3939-1: Russian T-72
No. 3949-1: KV-2
Gearbox with long output shaft:
Leopard 2 A6, M1A2 Abrams, M41 A3 Walker Bulldog, M26 Pershing, KV-1/KV-2, ZTZ-99, Königstiger, Jagdpanther, Jagdtiger, Panther G, Panther F, Challenger 2, T-90
Gearbox with short output shaft:
Tiger 1, Sturmtiger, Panther, Panzer III, Panzer IV, Stug III, T34-85
Information according RC tanks Models:
King Tiger / Tiger II
The difference between the 3rd and 4th generation Heng Long tanks:
in the 4th generation, you can now raise or lower the cannon, previously went only lift and then lower. The switch in the tower to turn off the shot function, there is no longer in the new generation, which now takes over the remote control. The sound quality has improved and there is no shot simulation, so no shooting without firing a bullet anymore. In addition, you can now switch between two tank sounds with the dual-sound-system.
What does Proportional Remote Control mean?
Proportional means continuously or evenly. In a proportional remote control, an analog [stepless] signal is used so that the acceleration is smooth and smooth. If the same application were to use a digital signal that controls in steps, jerks could occur. As an alternative to the analog signal, a PWM signal can also be used.
RC Tanks with Infrared-Battle-System [IR]:
Modern remote-controlled tanks are partially equipped with the Infrared-Battle-System for simulating a battle with multiple tanks. If a tank is hit this is put out of action for some time. This can lead to a realistic battle with several rc tanks. The effects of a hit are:
1st-4th Hits: The hit tank staggers and is disabled for 3 seconds.
5. Hits: The hit tank staggers heavily and shuts off. The tank needs to be restarted.
In order to convert Heng Long models with a airsoft shot function [BB] to an infrared system, further conversion measures are required [Video]. The infrared transmitter requires a 940nm high-output 5mm LED. The receiver requires an Infrared-Receiver.
Circiut diagram Rx-18 Board 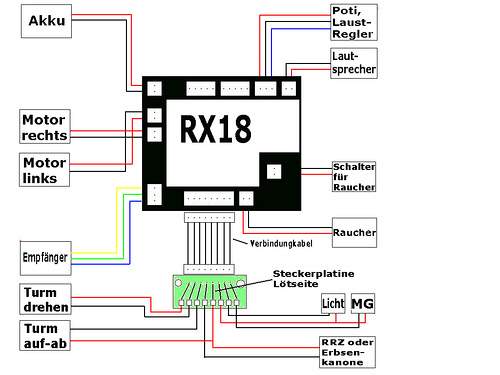 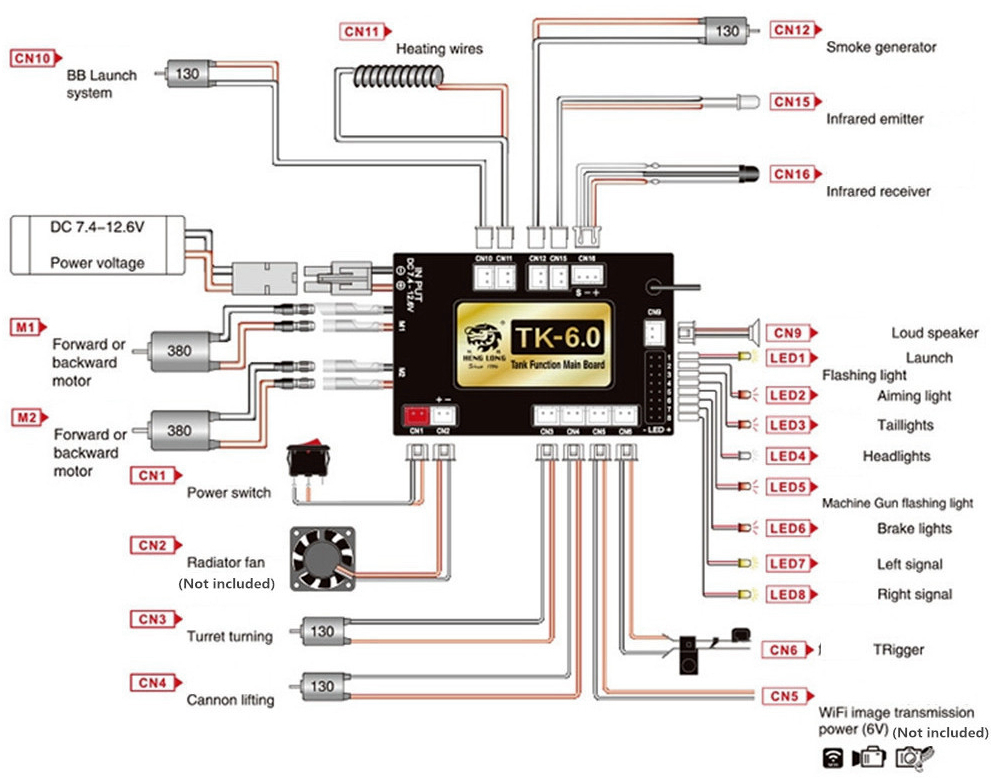 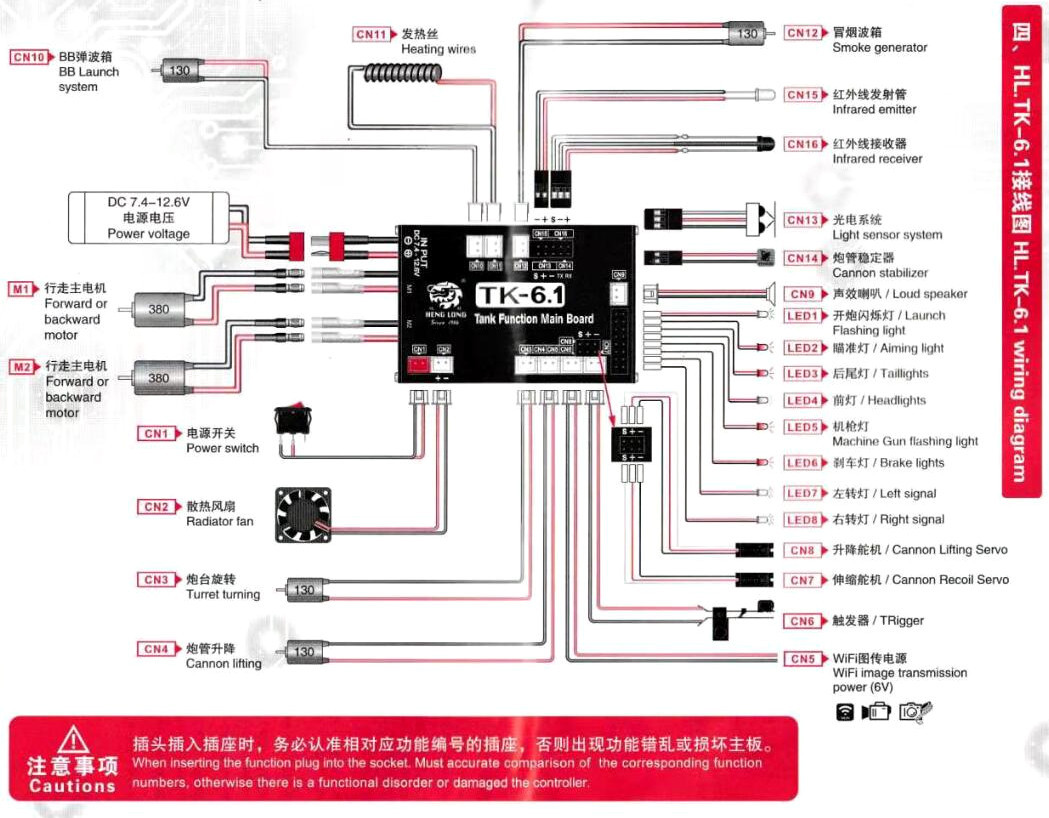 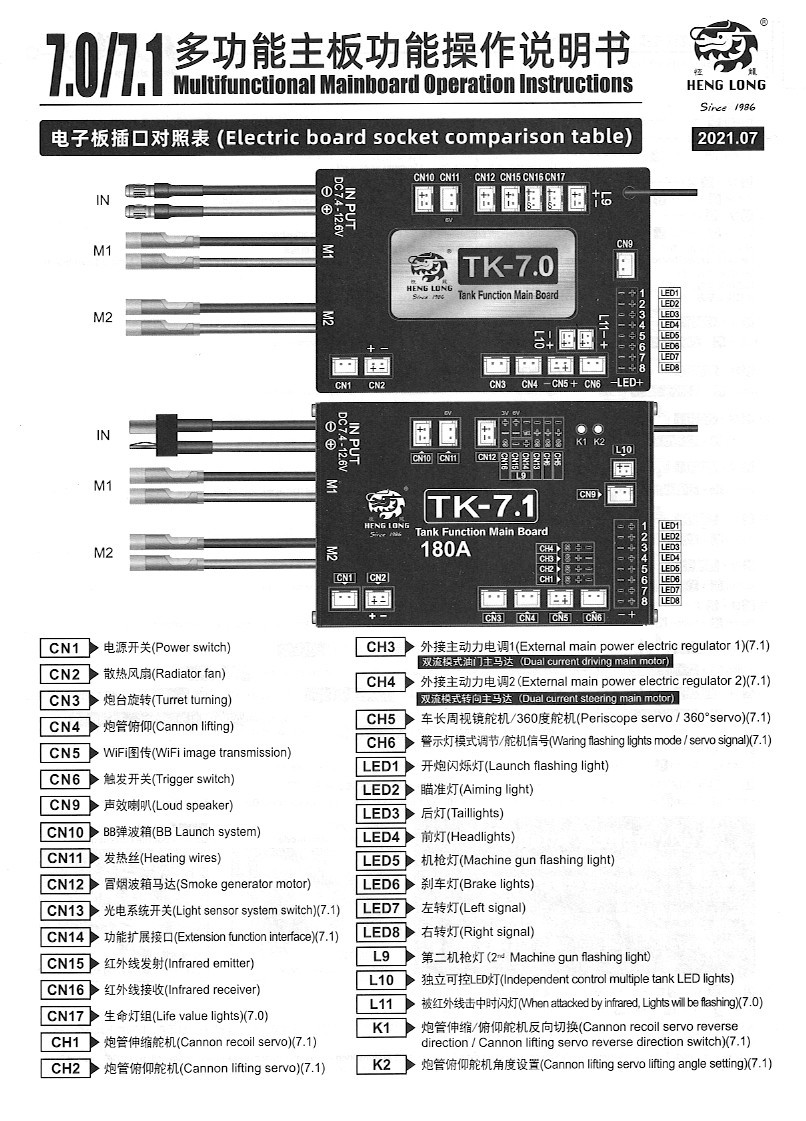 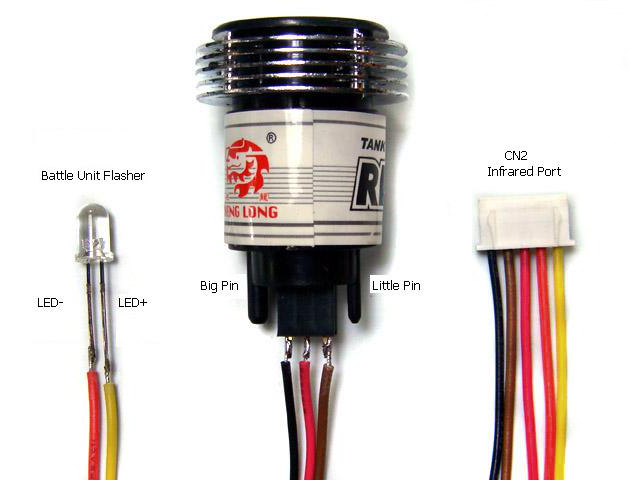 Spare parts / Tunning
The supply of spare and upgrade parts is good. Wear parts such as gears, chains and motors are available in every case for every model. The possibilities in terms Tunning and upgrades are almost endless and are limited only by the own purse. There are attachments from the series and individual accessories outside the series. Many parts, such as the commander's hatch or shovels and hatchets, are available in metal. The noise reduction of the tank can be improved with another sound module and speakers. Gearboxes can be replaced, metal underpans or metal turrets can be chosen. 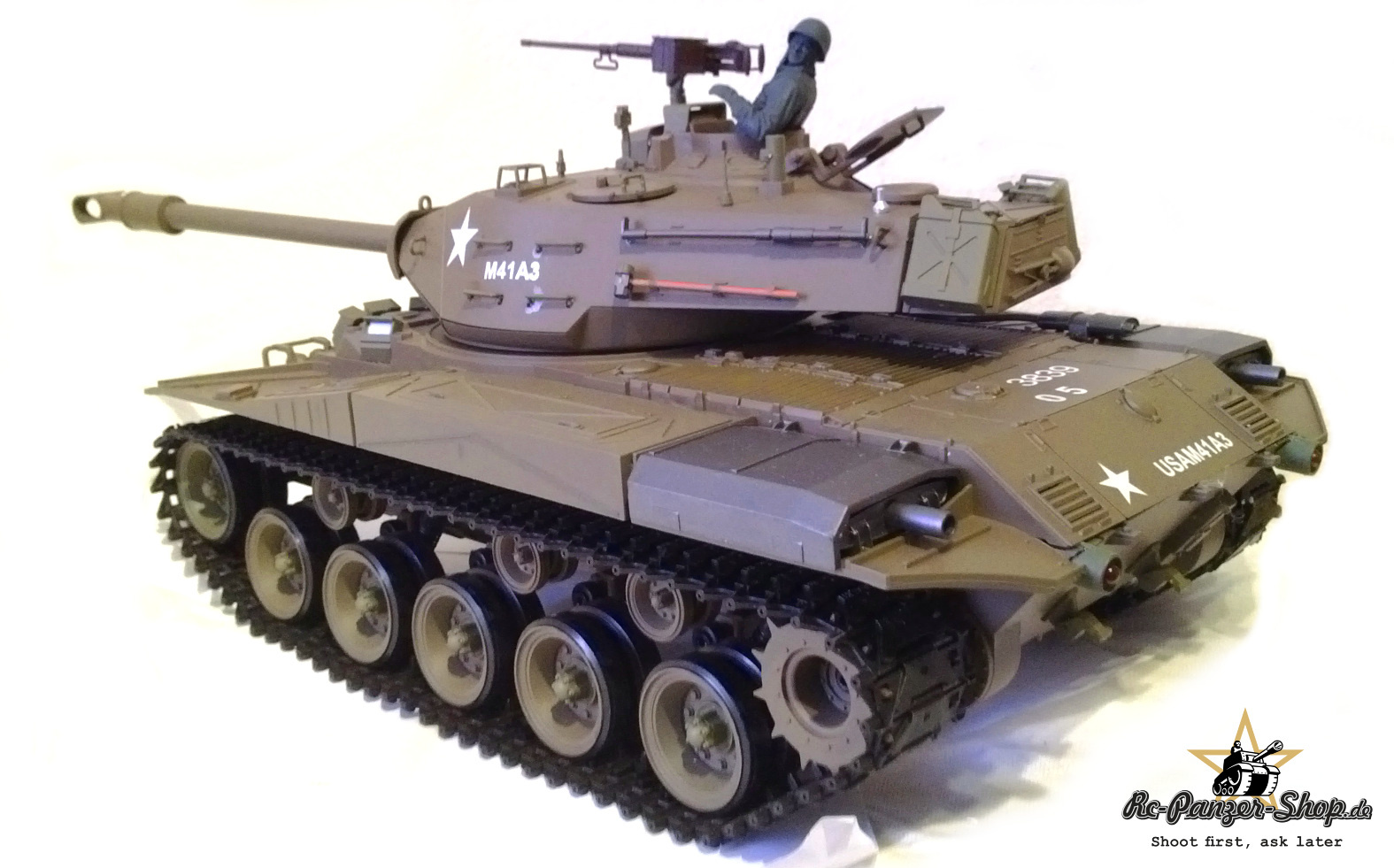 What do you get exactly?
Remote-controlled Heng Long RC Tanks have great value for money and a large fanbase around the world. The processing of the chassis and attachments is very good. Weaknesses of the Heng Long tanks are the gearboxes in plastic design, these are simply not intended for off-road use and can be replaced by metal gears or steel gears. For use in the living room, however, the plastic gear is sufficient. All Heng Long tanks are ready-to-run delivered, after charging the battery, the tanks are ready for use immediately. Only decals (stickers) and small parts such as tools and jerrycans still have to be installed to give the tank model the finishing touch.
Smoke
The smoke function lets smoke smoke from the mufflers. This feature can be controlled on the 2.4 GHz remote control, on the standard models without 2.4 GHz technology on the underside of the tank. The supplied smoke oil (aerosol) is heated by a smoke module / smoke generator and caused to evaporate. The contained 25ml bottle is enough for about 6 fillings which produce smoke for about 2 hours each. Smoke oil is available as an accessory for RC tanks.
Sound
All commands of the RC tank are supported by the sound function. These include starting the engine, driving, tower rotation, raising and lowering cannon, gunfire, machine gun fire and engine shutdown. The sound is generated by a small speaker in the tank. Also, the sound function can be upgraded with better speakers and other board. Many companies specialize in 1/16 scale upgrade equipment for tanks. The background noise can e.g. improved and individualized by a Bendini sound module and a Clark Paltine. Here is a video showing the possibilities of Soundtunnings: https://www.youtube.com/watch?v=OB2G45kpAkE
2.4 GHz technology
Remote controlled tanks with 2.4 Ghz technology are more reliable in operation, have a longer range and it can drive up to 50 identical tanks at the same time. Another advantage of the 2.4 Ghz version is the omission of antenna to tank and remote control. This makes the remote control more manageable and the tank is closer to its big original without an antenna.
How to "bind" 2.4 GHz remote control with an RC tank
To bind a 2.4GHz remote control to a Heng Long Tank press and hold the small button in the battery compartment of the rc tank and simultaneously hold the start button on the remote control, then release the button in the battery compartment. The tank should now start. 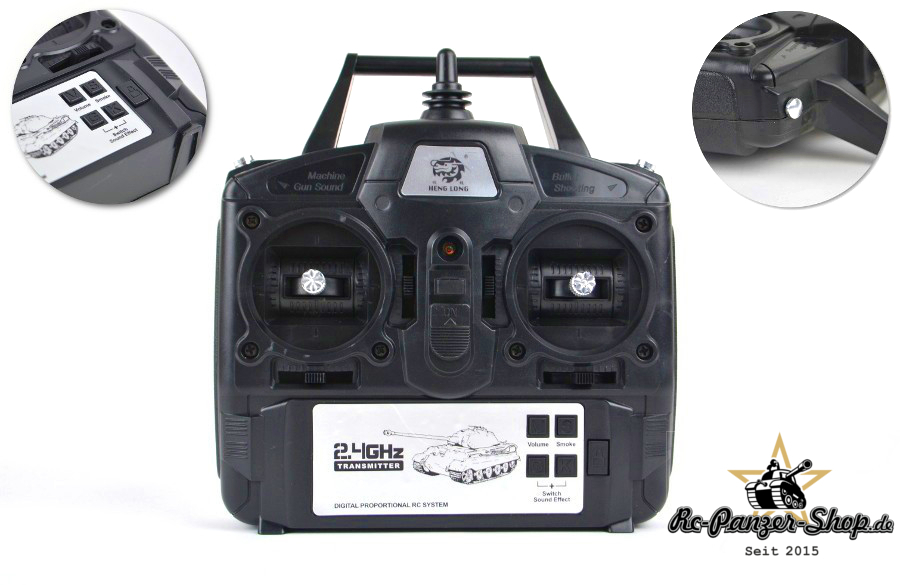 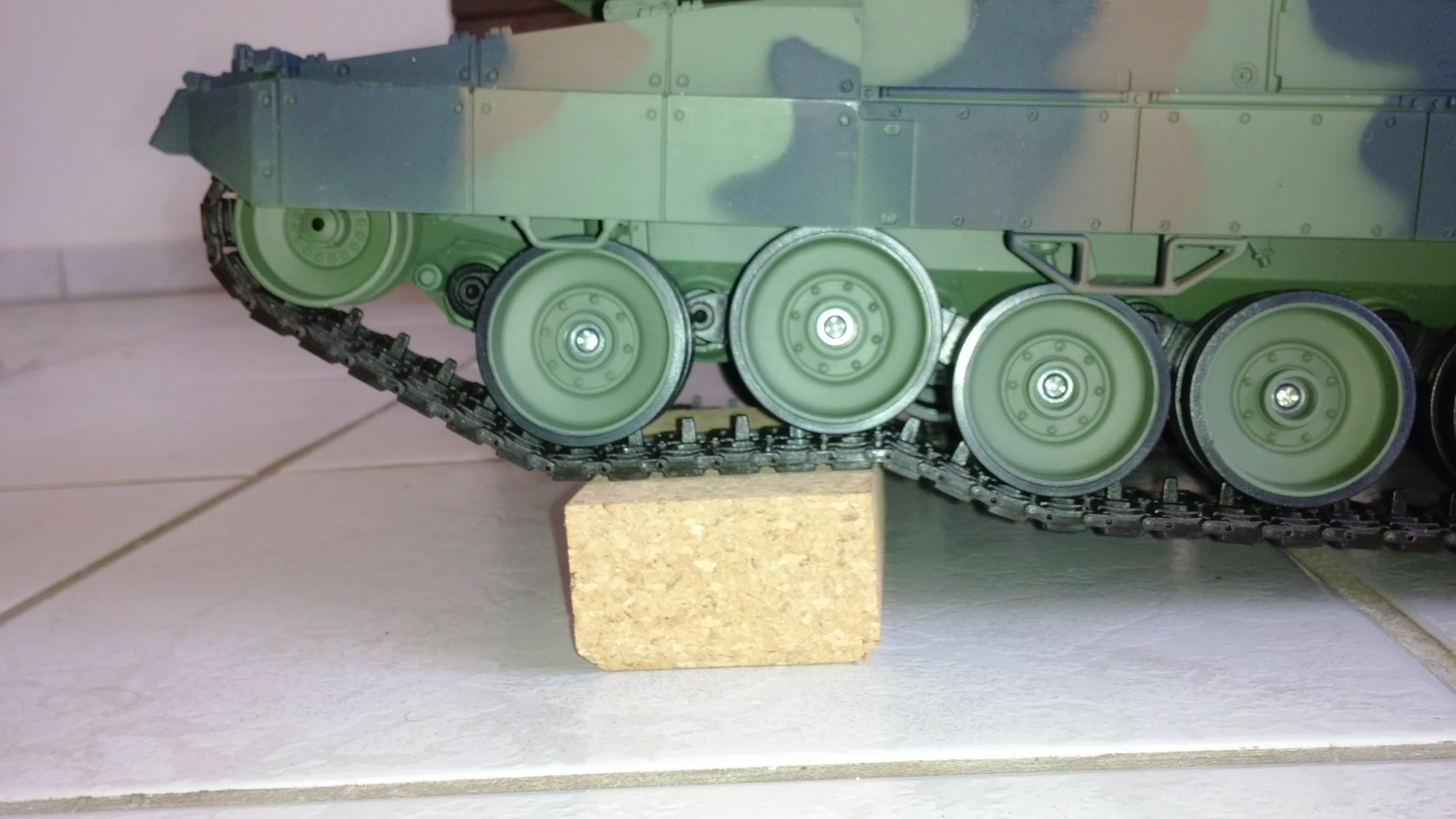 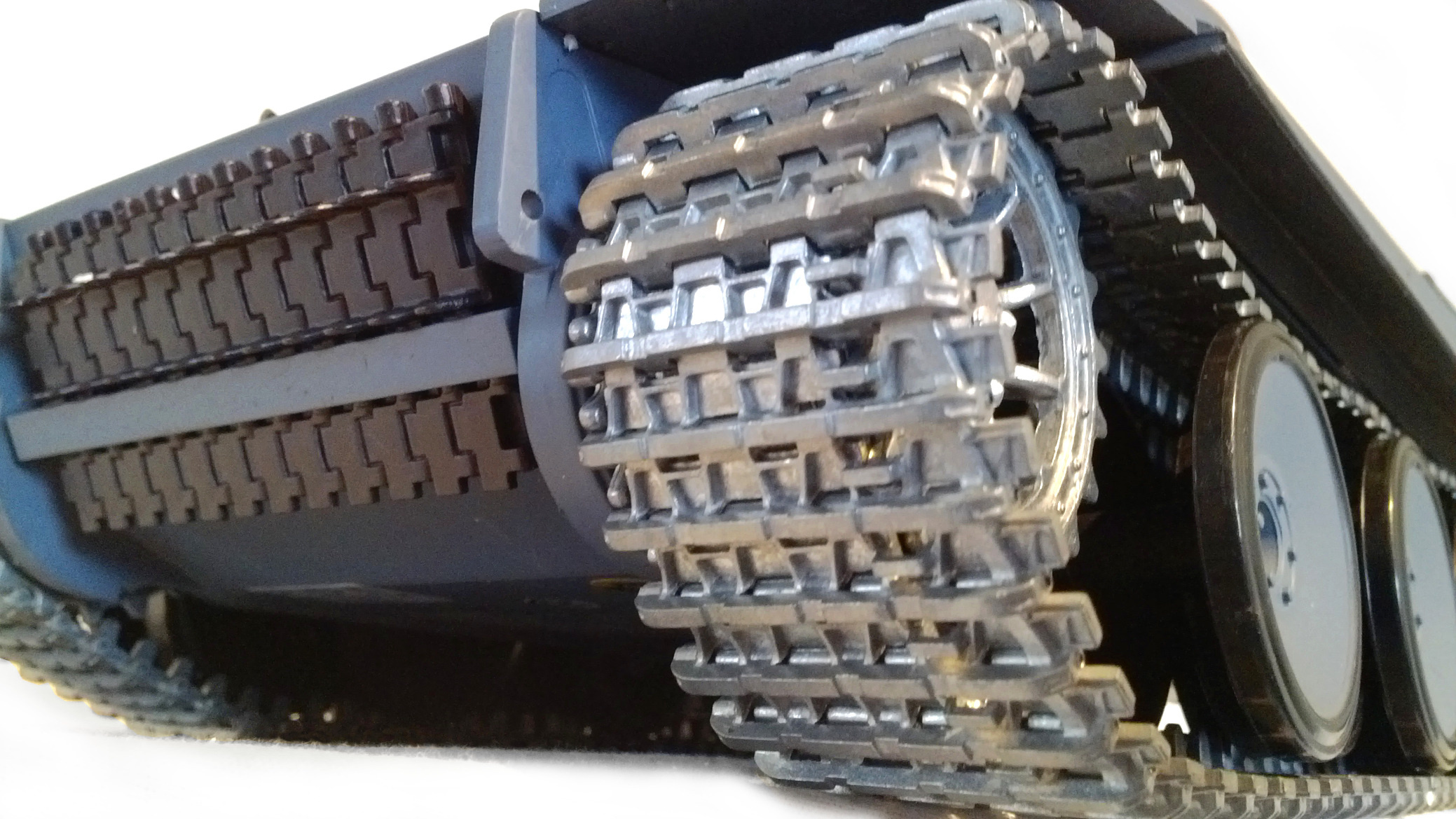 Chassis / Tracks
Heng Long's remote-controlled tanks are suitable for off-road use [use outside at own risk!] thanks to the tank tracks and can master inclines of up to 35 degrees. However, the manufacturer warns of moisture and sand or dirt that can get stuck in the electronics or gearbox and damage them. Outdoor uses are therefore to be treated with caution. Heng Long models are available in the standard version with plastic link tracks connected with steel pins or the Pro version with metal tracks. For all tank models metal tracks are available for retrofitting in different qualities. Replacing the tracks is easy and feasible for anyone who can hold an Allen key.
Recoil simulation
All of Heng Long's remote-controlled tanks offered in this shop have a recoil simulation. The tank makes a small sentence to the rear when fireing, this is implemented by a short snap back of the chain drive. Who wants to have his tank model perfectly true to the original can replace the recoil simulation by a real gun barrel-recoil. This conversion is, however, a bit more expensive since the gun barrel must be replaced. 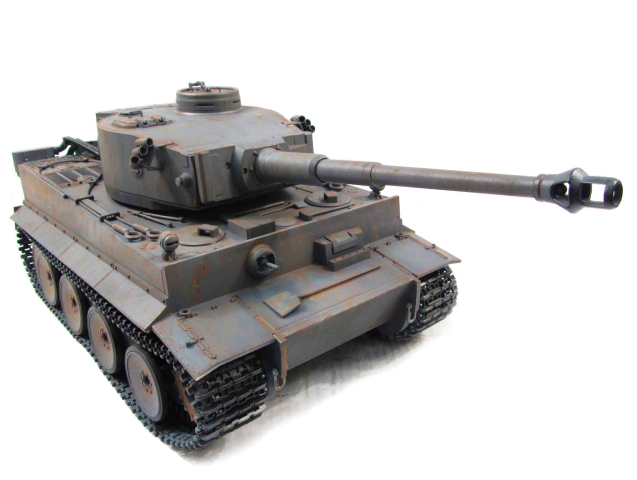 Infrared-Battle-System
Modern remote-controlled tanks are partially equipped with the Infrared Battle System for simulating a battle with multiple tanks. The tank sends out completely safe infrared rays. If a tank is hit this lowers the cannon is put out of action for some time, so unable to maneuver. All Heng Long tanks can be retrofitted with relatively little effort to the infrared system, but the BB shot function is lost. Either or so. Although it is also possible to build a hybrid system (infrared and BB), but this larger interventions in remote control and circuits of the tank are necessary. Conversion sets with transmitter and receiver for a tank are available for about 16 euros to buy.
BB-Airsoft shot function
All tanks offered in our shop have a shooting function and are therefore no children's toys! The age recommendation of the manufacturer is from 14 years and then only under the supervision of an adult. The 6mm BB plastic projectiles [Airsoft] have a range of about 25 meters. The firing function can be triggered by means of two switches on the remote control. Please observe the safety instructions of the manufacturer! 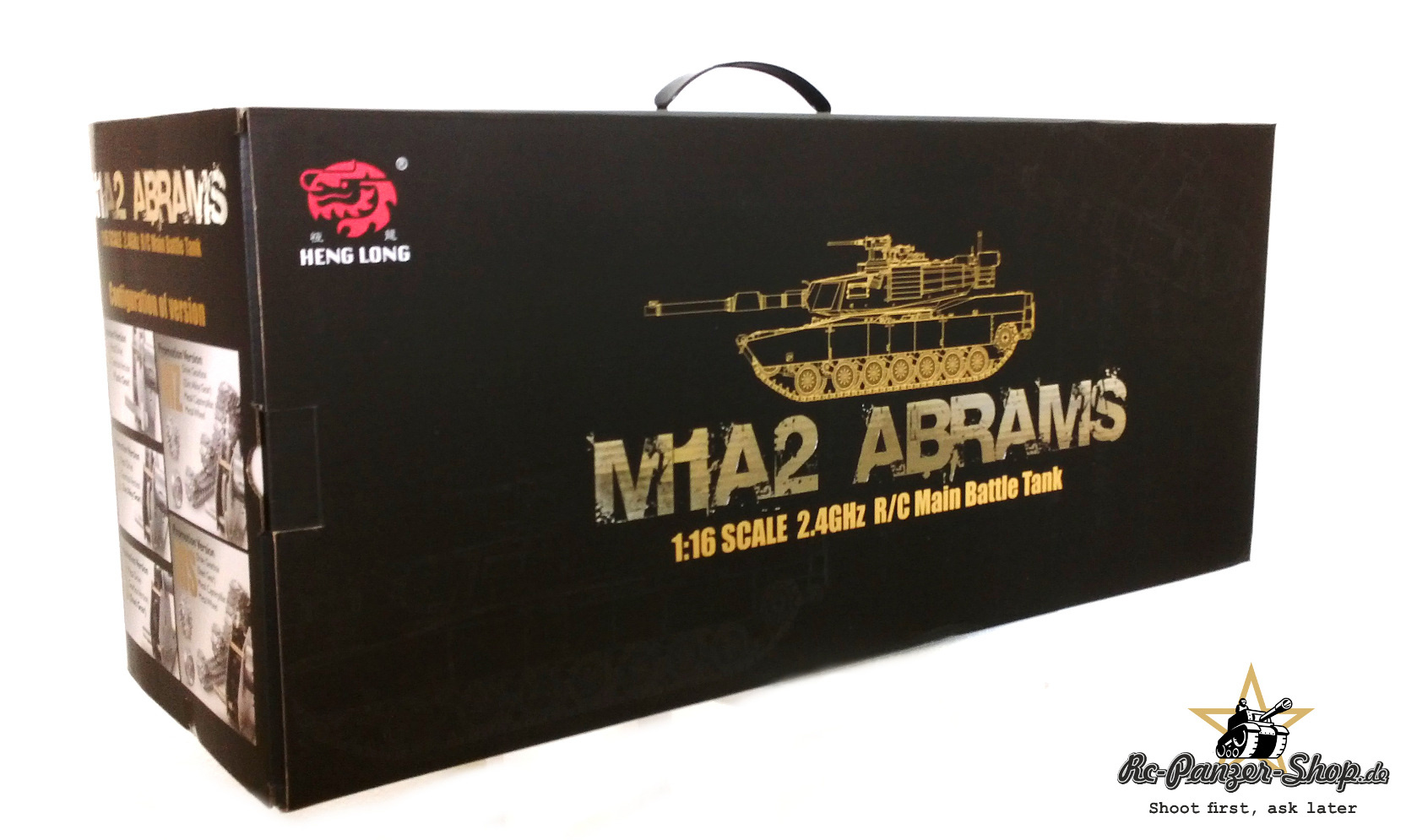