Werner Breidenbach - one of the best craftsman and master of his art that Solingen ever has seen.

Here you can find razors from the company Paul Drees as well as other straight razors made by Werner Breidenbach.

Werner Breidenbach started as apprentice in razor grinding at Paul Drees company in Solingen in 1948. Until closure in 2003 he was to remain loyal to this company as straight razor grinder and later also as owner for more than 55 years. During this time and also later he did not only grind and sell razors under the Paul Drees company name. It was usual in Solingen, that -real good- factories also ground razors for larger other companies who only put the brandname and logo on the finished razors and sold them under their name.

But lets come back to the history of Paul Drees:

One of the brand names of Paul Drees was Adresso.

The name Adresso is build of the following characters. At the end „SO“ for Solingen – as many Solingen companies did to form their brand names. The middle „DRES“ stands for Drees though one „E“ is missing. But what stands the „A“ for?

Paul Drees started the business as razor grinder sometimes after WW1. But the later company itself was not founded as Paul Drees but as Alfred Drees in 1932/33. So the „A“ stands for Alfred who was the son of Paul Drees. Here is a picture of an old Alfred Drees -Adresso- razor (unrestored) with the cardbox. 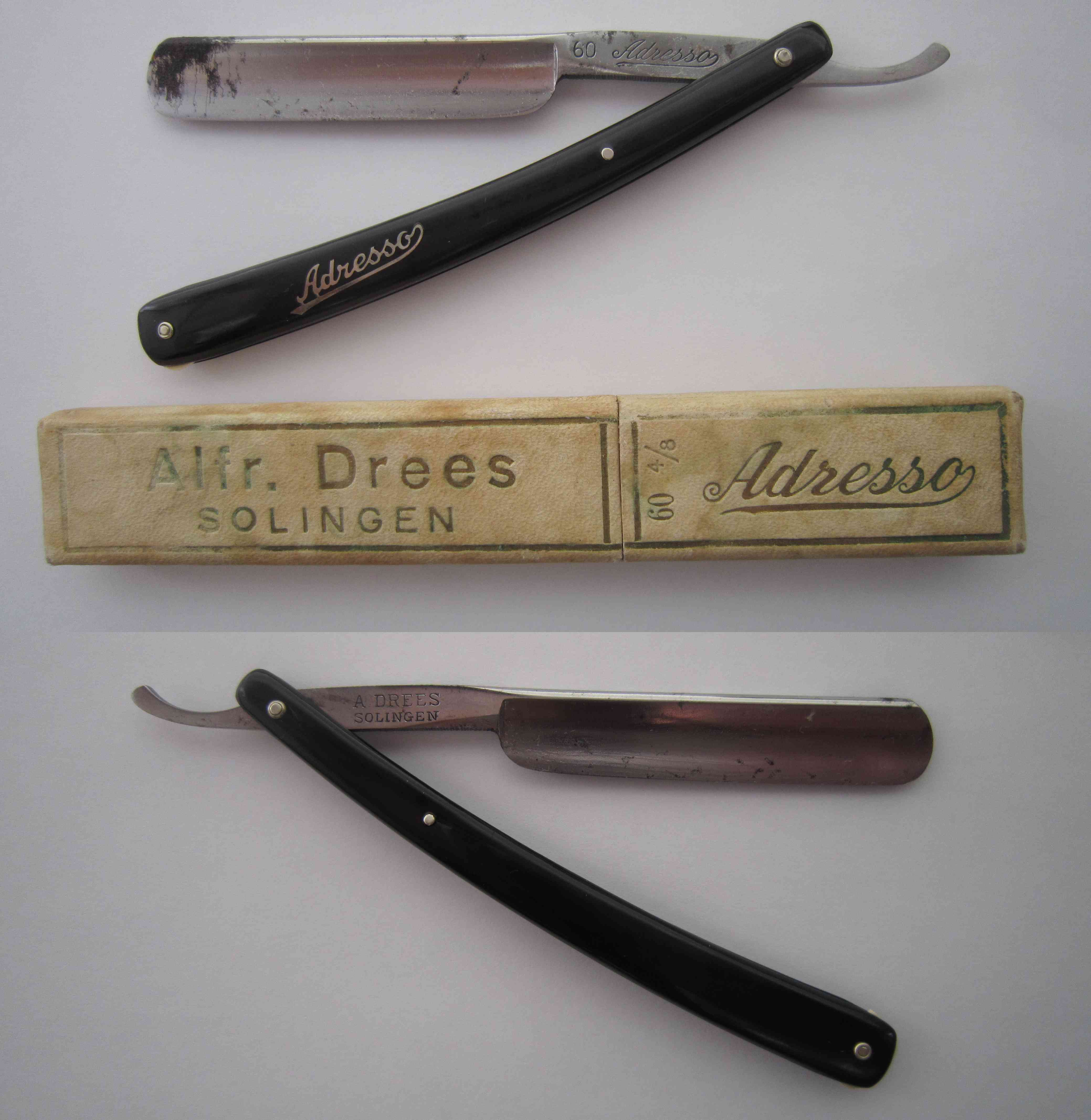 So why this? It helps to understand to know something about the organisation of the working and factory business in Solingen in the 19th and 20th century.

In Solingen a lot of workings have been done by homeworkers in one-man-business units. The grinders had their little workshop – in Solingen called „Kotten“ – with all necessary equipment, often in the basement of their homes or in barnes in the neighbourhood. Sometimes a couple of single homeworkers shared a workshop.

Paul Drees was such a homeworker. As many others, he worked for different companies as straight razor grinder. He got the blankets from the companies, took them home to the workshop, ground and polished them and returned the finished razors to the factories. Sometimes the grinders also mounted the razors in scales and honed them. But in general, the job of scale-mounting and honing of the razors was a different business and teaching profession.

So around 1932 Paul Drees made the decission to grind razors (also) with his own brand and for his own wallet. But at the beginning he still needed the work from other factories as a homeworker, because of the money and reputation. And the companies didn’t like homeworkers that were also doing business on their own. So the company was founded on the name of his son Alfred. Later the company name was than changed to Paul Drees. 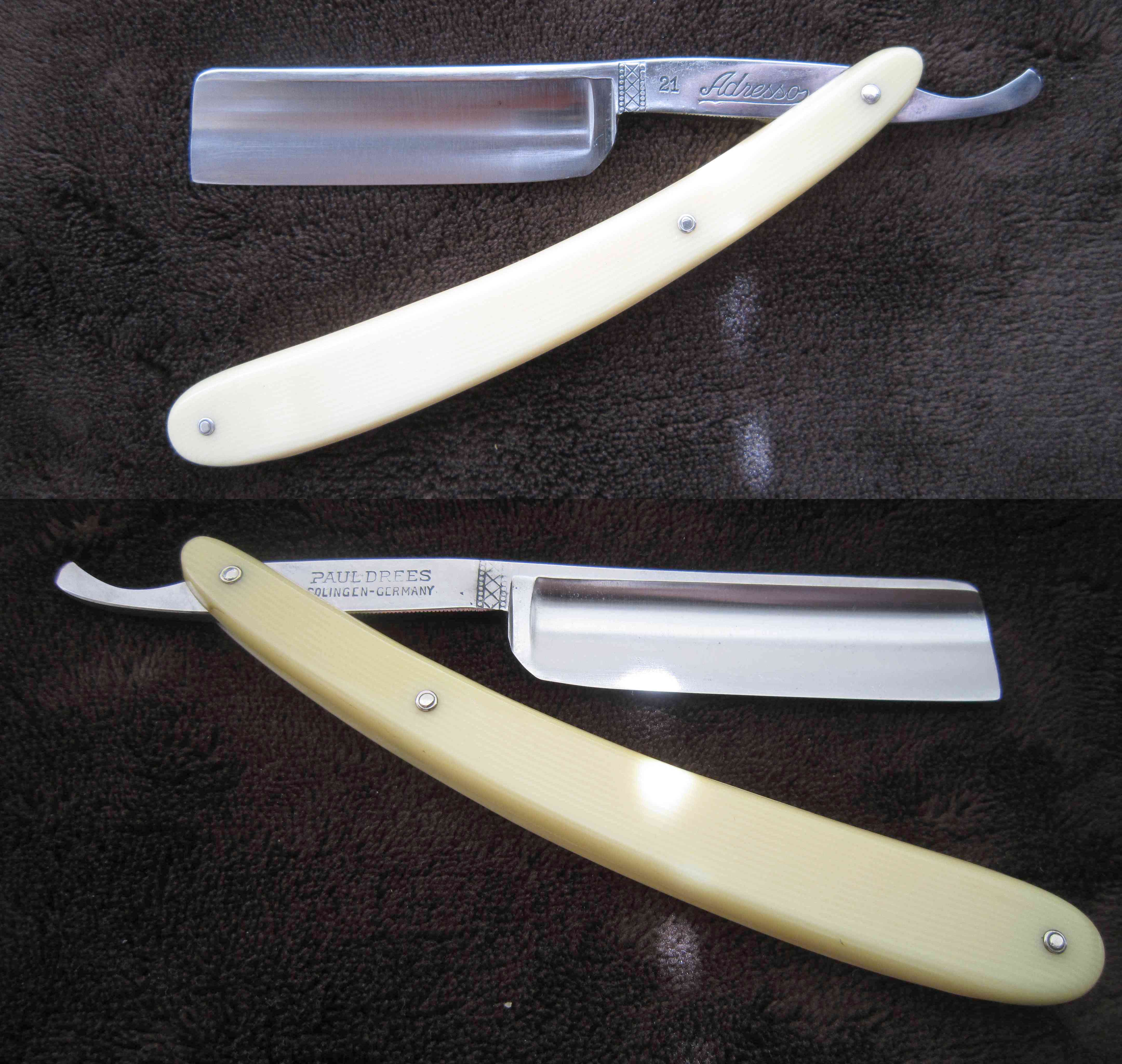 Werner Breidenbach grew up in Solingen among grinding and razor fabricating workshops.

A lot of his family members have been razor grinders or scale-mounters and honers. As a young boy Werner always played around and looked through the windows of the old workshops. He never wanted to do anything else than to learn how to grind straight razors.

The Paul Drees company still ground razors for other companies but also fabricated a lot in their own name at this time.

Brand names beside the Adresso have been Sistrum, Dreifuss and (very few) Sundermann.

A lot of Paul Drees razors were sold to Italy. The Italian market for straight razors was very ambitious. Italien barbers liked the razors very thin ground – singing razors, demanding high requirements on the skill of the grinders. But this high skills and their presence in the Italien market helps the Paul Drees company to survive longer than much other razors manufactories. From the late 1950‘s the market for straight razors was going down in general, it nearly dissappeared beginning of the 1970’s. An exception was Italy. And in Solingen only razor factories could survive at this time that exported to Italy or Japan.

In 2003 the Drees company was closed and the history of Paul Drees razors ended officially.

But not the history of Werner Breidenbach razors …….!